In March 2013, my class of 16 students embarked on a 3 week long trip which would completely alter our views of the world. While our friends were vacationing at resorts in Mexico for spring break, we were looking past the touristy aspect of Central America, digging deep into the culture of Nicaragua.

The course is a very special class for 16 and 17 year olds at West Vancouver Secondary School in British Columbia, Canada which gives students a unique opportunity. It allows motivated students with a passion for learning about the world and a desire to help those in need a chance to put their passion to use beyond the border. 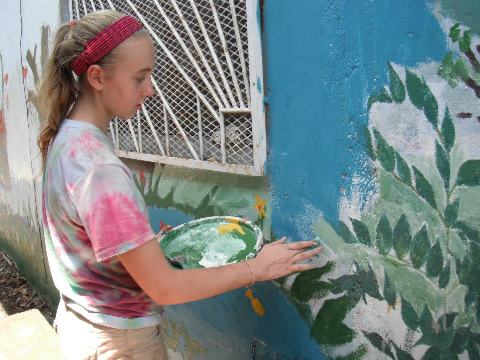 In preparation for our voyage we held multiple fundraisers around the community to help us fund our volunteer projects. Rather than restarting and abandoning projects each year, the 10 years which the class has been running has allowed the participants to focus on benefiting a specific community, transforming it further each year. Throughout the years, students have taken part in various projects around the small community of Balgue. One year, this included installing washing pilas (sinks) at the homes of some of Balgue’s residents. Another year, students joined another organization to take part in building and supplying books for a library at the elementary school. Each year, along with conducting their annual project, students spend some time volunteering at the town’s community centre. Since we first began volunteering there, the work of our class as well as various other volunteer groups has transformed the centre from a simple structure to the town’s central place. It is now equipped with a playground, a building for a sewing co-operative, a computer room, and a kitchen which runs a breakfast program for the children of the town.

Each year’s actions have benefited Balgue in a unique way and this year, we conducted a very special project. After observing the very few musical instruments which the residents had access to in Balgue, last year’s participants proposed that we carry out their project: “Guitars for Balgue”. After spreading the word, Gibson’s Guitars (a local business) generously donated 10 guitars to us. We brought down the 10 guitars to Nicaragua and left them at the community centre in Balgue. We then used some of our fundraised money to hire a guitar teacher who would teach guitar lessons there. The project was a huge success and the people living in the community were extremely excited at the prospect of being able to learn guitar.

As we spent three weeks in Nicaragua, we had a lot of time to partake in many different opportunities to volunteer. On the Island of Ometepe, we spent many laborious hours volunteering as we helped to build a road. At the community centre, we constructed a composting system and painted a pretty mural onto the walls of the centre. Our class also visited a permaculture farm called Finca Bonafide which helps local farmers use sustainable forms of farming. It is a farm run by foreign volunteers and it was very cool to see such passionate young individuals trying to aid Nicaraguan farmers. We spent 5 days there, learning about the practice of permaculture as well as doing various jobs around the farm.

Throughout our trip we stayed in several places such as Managua, Grenada, and Ometepe. As well as the volunteering aspect of the trip, the class aimed for us to gain a better perspective of the world. The 7 nights which we spent on Ometepe in a town called Balgue were undoubtedly the most memorable part of the trip which impacted me the most. For this week we were living with homestay families. Each student created a special bond with their homestays and even since I returned home, I think about my homestay family often. The families which we were placed with were average Nicaraguan families who lived off of a mere $2 a day. Our homestay family was an amazing family whose generosity and kindness towards us was incredible. The home was very small and our beds were surrounded by dusty brick walls and a tin roof. The week was a taste of the true Nicaraguan lifestyle and we came out of the experience with an incredible amount respect for our hardworking homestay families.

The time spent with our homestays made me come to the realization that many of my preconceived about Nicaragua were incorrect. Living in a first world country, many people expect that those with less than us will feel envious of our privileges. In such a materialistic society, it is difficult for us to grasp the concept that some of the happiest people in the world are also the poorest. When I first arrived at homestays I found myself feeling surprised when I saw how happy the family was with the way that they were living. Our homestay mother told us one night that while they would love to have more money to put towards food, medicine, education, and fixing their home, they really didn’t need anything fancy or non-essential. They were happy with their way of life and although they were aware of more wealthy people around the world, that was not something which was constantly on their minds.

After returning home, I constantly find myself questioning what is really important in life. I have realized that possessions are nowhere near as important as many intangible aspects of life. At many moments, our homestay family’s sparse possessions prompted me to think of my own home and all of the unnecessary clutter which I had accumulated. It disgusted me to think of how much money I spent on things I didn’t really need while families around the world were deprived of the bare minimum.

Reflecting on my trip, the experience was truly life-changing and I never would have anticipated that it would teach me so much. Nicaragua is an incredibly beautiful country and the people there were so kind and appreciative of our actions. I really hope that I will have the opportunity to return to Nicaragua one day in the near future.

2 thoughts on “My Experience in Nicaragua -By Lucy Mavko”

I am often asked about volunteer scams and whether a given volunteer program is "legit" or not and [...]

TripKits: Making teachers out of travellers…

by Caz Openshaw I’d say I have quite a bit of volunteering experience, having lived in a centre for[...]

The Thai of my life!

One afternoon, I decided it was time to wake up from my day dreams and turn them into a reality. Ha[...]

If you are reading this blog, the chances are that you are interested in volunteering in another cou[...]